About the China Data Institute Datasets

The China Data Institute datasets provide yearly historical indicators of social and economic characteristics of the People’s Republic of China. Included are national-level statistics dating in some cases to the 1950s. Premium subscriptions to Data Planet also include access to China Yearly Statistics (National/Subnational) datasets distributed by the China Data Institute, which provides data (as available) for all provinces, cities and counties within provinces, all cities, and all counties in China.

Statistics are provided on population; national accounts, including Gross Domestic Product and Balance of Payments; employment, labor, and wages; financial and banking data; price indices; government income and expenditures; agriculture; industry, construction, and transportation; domestic and foreign trade; education; health; and natural resources. The data are collected primarily by the National Bureau of Statistics of China, who is charged with the administration of the national statistical information system of China.

About the China Data Institute

China Data Institute is one of the primary data providers for China data services. Its missions are: to support research in the human and natural components of local, regional and global change; to promote quantitative research on China; to promote collaborative research in spatial studies; and to promote the use and sharing of China data in teaching and research. The institute is partnering with All China Marketing Research Co., Ltd., as well as other organizations in distributing China statistical data and publications internationally.

Clink on the links below to view sample DataSheets created in Data Planet Statistical Datasets that provide statistical abstracts complete with infographics of indicators included in the China Data Center datasets. From the infographic, you can also enter  to further manipulate the data and explore relationships between these metrics and other indicators in the vast Data Planet repository.

The examples below are just a sampling of China Data Institute statistics to give you an idea of the granularity of the available data. There are many more indicators on this topics in the repository - add search terms for agriculture, social and economic development, government, etc. Contact your library staff for help in formulating your search strategy.

Divisions of Administrative Areas - Shows the number of town and township governments in China.

Natural Conditions and Resources - Shows the increase over the in the area of cultivated land in the province of Hainan.

National Accounts - Shows the trend in the GDP of the province of Guangxi.

Balance of Payments - Shows the position of goods in the current accounts balance of China.

Population - Shows the trend in the registered household population of Hohhot City, the capital of Inner Mongolia.

Employment- What might account for the drop in employment in Suining City districts of Sichuan province in 1998?

Price Indices - Shows the trend over time in the Consumer Price Index of China.

People's Livelihood - Displays the trend in net income per capita of the rural population of Zhaodong City in Heilongjiang province.

Agriculture - Shows the amount of hectares impacted by natural disaster in the province of Guizhou.

Industry - Tracks the gross industrial output of Guangdong province. From the DataSheet, click through to Data Planet Statistical Datasets to compare how much of this value comes from light vs heavy industry, or from state- vs collective-owned enterprises.

Domestic Trade - Tracks the increase in domestic sales of consumer goods in China.

International Tourism - Tracks the trend in the value of international tourism in Beijing.

Banking and Insurance - Shows liabilities to international financial institutions for the nation as a whole.

Culture - Displays statistics on the number of volumes held in the collections of public libraries in Qinghai province.

Education Yearbook - What might explain the drop off in the number of primary schools in Yunnan province since 1990? 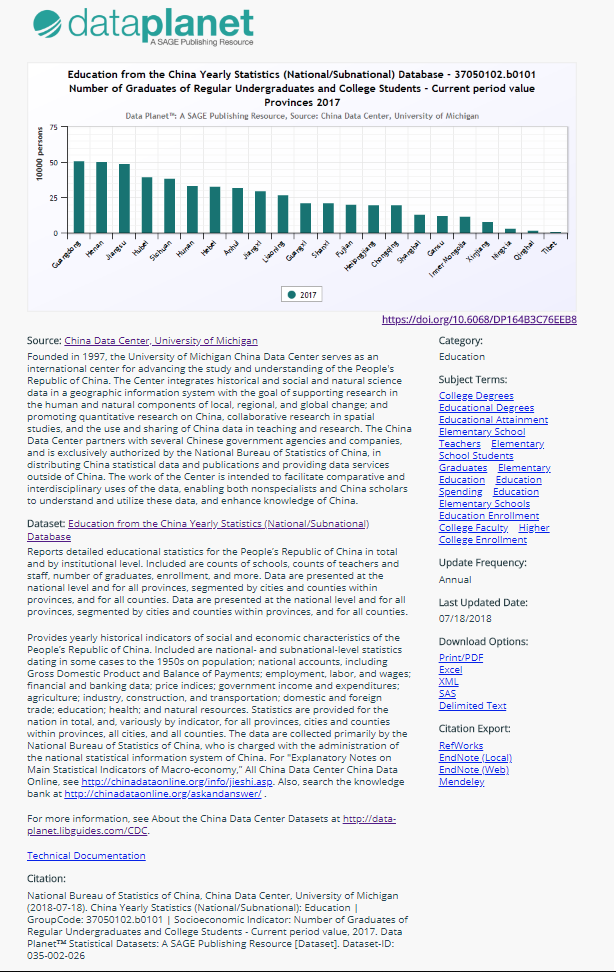