Explore the Data Planet repository for statistics on Alabama, by broad subject categories.

Formerly part of the Mississippi Territory, the land that became Alabama was established as the Alabama Territory in 1817 and became the 22nd state to join the United States on December 14, 1819. The state is named after the Alabama Indian tribe that inhabited western Alabama and eastern Mississippi until the early nineteenth century. This information was drawn from the Encyclopedia of Alabama , where you will find more information on Alabama's famous people, history, sports, art, literature, industry, government, plant and animal life, agriculture, recreation, and more. Also visit the Alabama.gov website for more information and data.

Search for data on Alabama in Data-Planet Statistical Ready Reference using broad subject categories. Note that the searches retrieve top-level views of datasets: there are many more indicators and variables included in each dataset, and more granular geographies. Add additional keywords to retrieve more precise results.

This sample DataSheet from Data-Planet Statistical Ready Reference maps the count of vacant housing units in Alabama, from Census 2010. 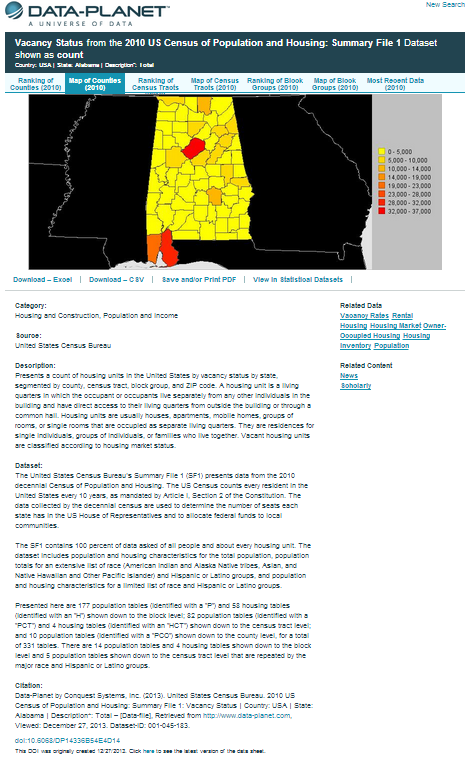