Skip to Main Content
It looks like you're using Internet Explorer 11 or older. This website works best with modern browsers such as the latest versions of Chrome, Firefox, Safari, and Edge. If you continue with this browser, you may see unexpected results.

Provides a guide to statistics on elementary and secondary education in the United States.

About US Public Elementary/Secondary Education Statistics

Many of the statistical datasets on US public elementary and secondary schools that are available in the Data-Planet repository are drawn from the Department of Education’s Common Core of Data (CCD) database, a comprehensive, annual, national statistical database of all public elementary and secondary schools and school districts, which contains data that are designed to be comparable across all states.

CCD is made up of a set of five surveys sent to state education departments. Most of the data are obtained from administrative records maintained by the state education agencies (SEAs). Statistical information is collected annually from approximately 100,000 public elementary and secondary schools and approximately 18,000 public school districts (including supervisory unions and regional education service agencies) in the 50 states, the District of Columbia, Department of Defense Schools, and the outlying areas.

Data-Planet CCD datasets include the following:

Statistics on Private Education in the US

The NCES also collects data on private elementary and secondary schools in the United States in its Private School Universe Survey (PSS). PSS grew out of a proposal in 1988 to develop a private school data collection that would improve on the sporadic collection of private school data dating back to 1890 and improve on commercially available private school sampling frames. PSS was first collected in the 1989–1990 school year, with data collections every two years since. The target population for PSS is all schools in the US that are not supported primarily by public funds, provide classroom instruction for one or more of grades kindergarten through 12 (or comparable ungraded levels), and have one or more teachers. Organizations or institutions that provide support for homeschooling but do not provide classroom instruction are not included.

Clink on the links below to view sample DataSheets comprising statistical abstracts complete with infographics of indicators relevant to US public education in Data-Planet Statistical Datasets to further manipulate the data and explore relationships between education metrics and other indicators in the vast Data-Planet repository. [Note that when you are logged into Statistical Ready Reference, you can create an updated version of the DataSheet to view the latest available data.]

The indicators below are linked to DataSheets. These are just a sampling to give you an idea of the granularity of the available data. There are many more indicators on this topic in the repository - add search terms for race/ethnicity, states, counties, and more, or contact your library staff for help in formulating your search strategy.

School count - alternative schools: Shows the trend in the number of schools in the United States classified as alternative.

School count - Title I (entire school): Shows the trend in the number of schools in Texas in which all students are eligible for participation in programs authorized by Title I of Public Law 103-382.

Student count - lunch assistance eligible students: Ranks the top 15 states with respect to the number of students who are eligible for the Free and Reduced-Price Lunch Program under the National School Lunch Act.

Clink on the links below to view sample DataSheets comprising statistical abstracts complete with infographics of indicators relevant to US private school education in Data-Planet Statistical Datasets . Log in to create an updated version of the DataSheet to view the latest available data and to further manipulate the data and explore relationships between education metrics and other indicators in the vast Data-Planet repository.

The DataSheet below shows a ranking of the top US counties in terms of amount of federal revenue received to support bilingual education. The infographic was created in Data-Planet Statistical Ready Reference. 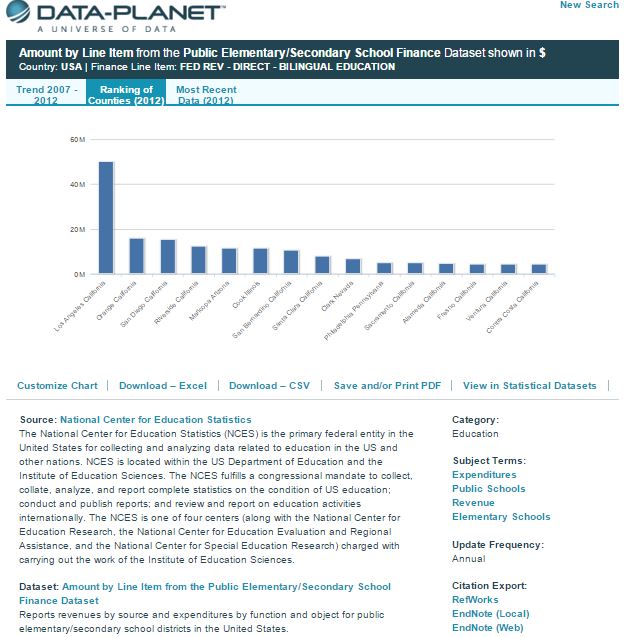 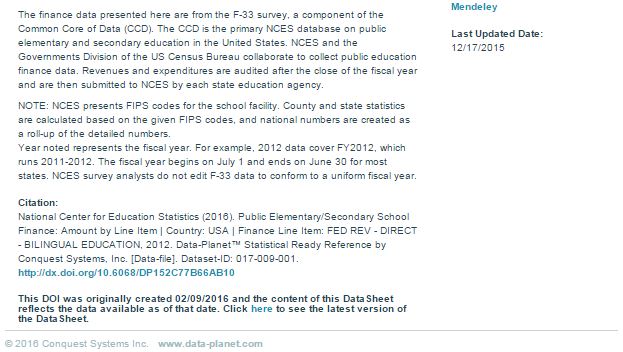 B14002. Sex by School Enrollment by Level of School by Type of School for the Population 3 Years and Over - compares numbers of males and females enrolled in public vs private nursery schools and kindergarten in New York City

B14005. Sex by School Enrollment by Educational Attainment by Employment Status for the Population 16 to 19 Years - compares employment status among males who are vs are not high school graduates not currently enrolled in schools in New England states.

B15002. Sex by Educational Attainment for the Population 25 Years and Over - ranks US states by number of females vs males who are high school graduates.

B16010. Educational Attainment and Employment Status by Language Spoken at Home for the Population 25 Years and Over - shows numbers of English-only vs Spanish-only speakers who are in or not in the labor force in Miami-Dade County.

B17003. Poverty Status in the Past 12 Months of Individuals by Sex by Educational Attainment - shows a heat map of US states of numbers of males with less than a high school education whose income is below the poverty level.

B27019. Health Insurance Coverage Status and Type by Age by Educational Attainment - shows a ranking of top 10 US states based on numbers of persons with less than a high school education that have vs do not have health insurance coverage.