Explore the Data Planet repository for statistics on Florida, by broad subject categories.

While populated some 12,000 years ago by hunter-gatherer cultures, Florida's first written history began with the arrival of the Spaniard Ponce de Leon in 1513. The first permanent European settlement was established in 1565 at St. Augustine. The area was under the control of the Spanish, followed by the British, and again by Spain. It was acquired from Spain as a US Territory in1821 and admitted as the 27th of the United States in 1845.

Ranked 22nd of states with respect to total land and water area, Florida is the 4th largest state in terms of population.

This information was drawn from the Florida Department of State Division of Historical Resources website, where you will find more detail on Florida and its history.

Search for data on Florida in Data-Planet Statistical Ready Reference using broad subject categories. Note that the searches retrieve top-level views of datasets: there are many more indicators and variables included in each dataset, and more granular geographies. Add additional keywords to retrieve more precise results.

This sample DataSheet from Data-Planet Statistical Ready Reference shows a map of Florida counties according to the employee compensation received. Miami-Dade County ranks #1. 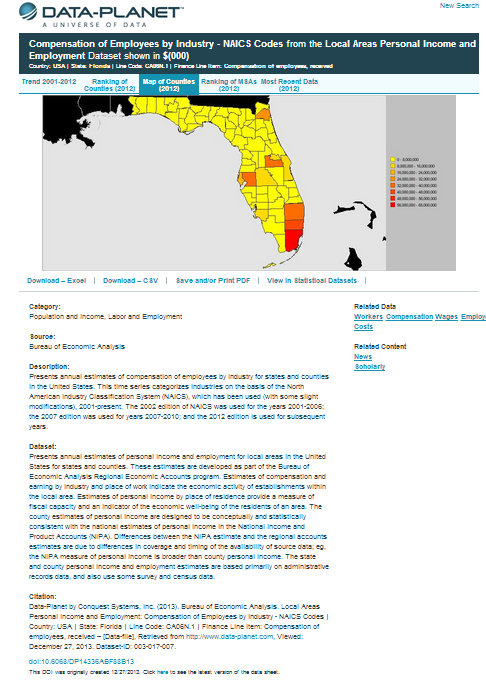