Explore the Data Planet repository for statistics on Hawaii by broad subject categories.

Hawaii is a string of 137 islands encompassing a land area of 6,422.6 square miles in the north central Pacific Ocean about 2,400 miles from the west coast of the continental United States. From northwest to southeast, the major islands are: Niihau, Kauai, Oahu, Molokai, Lanai, Kahoolawe, Maui, and Hawaii.

Home to a rich Polynesian culture, British Captain James Cook arrived in the Islands in 1788 on his third voyage to the Pacific. Hawaii was annexed to the US in 1898 and it became a state in 1959.

This information was drawn from Hawaii Facts and Figures, published by the Hawaii State Department of Business, Economic Development & Tourism, and HawaiiHistory.org.

Search for data on Hawaii in Data-Planet Statistical Ready Reference using broad subject categories. Note that the searches retrieve top-level views of datasets: there are many more indicators and variables included in each dataset, and more granular geographies. Add additional keywords to retrieve more precise results.

This sample DataSheet from Data-Planet Statistical Ready Reference shows a ranking of Hawaii's four counties according to the number of homes sold in 2013. 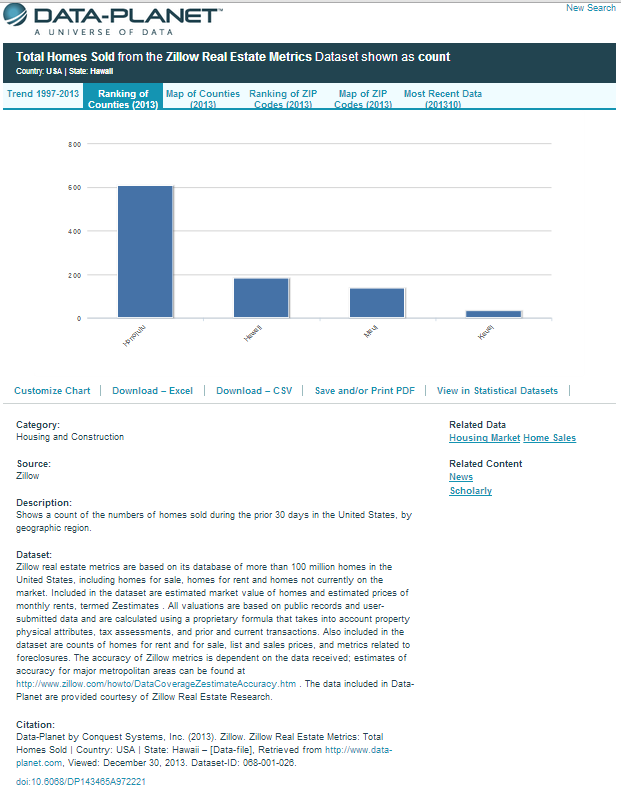