Explore the Data Planet repository for statistics on Idaho, by broad subject categories.

Lewis and Clark entered Idaho in 1805. It became a US Territory in 1863 and was admitted to the union as the 43rd state in 1890. It is the nation’s 13th largest state, and has more miles (3,100) of rivers than any other state. It is also home to the deepest river gorge in the US, Hells Canyon. Known as the “Gem State,” Idaho produces 72 types of precious and semiprecious stones, some of which are found nowhere else in the world.

This information was drawn from the websites of Idaho.gov and the Idaho State Historical Society, where you will find more detail on Idaho facts and history.

Search for data on Idaho in Data-Planet Statistical Ready Reference using broad subject categories. Note that the searches retrieve top-level views of datasets: there are many more indicators and variables included in each dataset, and more granular geographies. Add additional keywords to retrieve more precise results.

This sample DataSheet from Data-Planet Statistical Ready Reference shows a a map of Idaho counties according to average family size from the 2010 US Census. 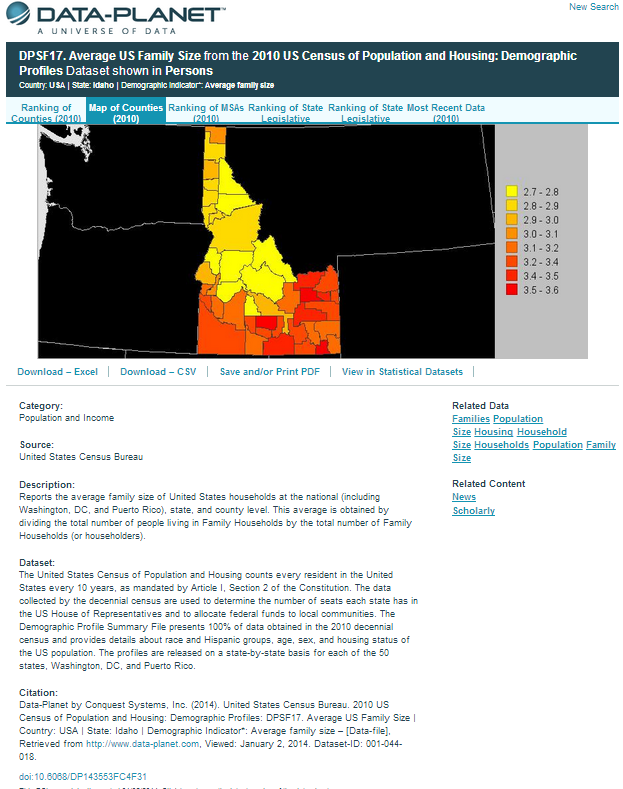