Explore the Data Planet repository for statistics on Illinois, by broad subject categories.

French explorers Louis Jolliet and Father Marquette arrived in Illinois in 1673, and it became part of French Louisiana in 1717. At the end of the French and Indian war, Illinois came under England’s rule. In 1809, Illinois became a territory and attained statehood in 1818 as the 21st state. In 1865, Illinois became the first state to ratify the 13th Amendment to the Constitution abolishing slavery. Known as the Land of Lincoln and home to the Abraham Lincoln Presidential Library, the state is also the birthplace of Ronald Reagan.

This information was drawn from the Illinois.gov website, where you will find more detail on Illinois facts and history.

Search for data on Illinois in Data-Planet Statistical Ready Reference using broad subject categories. Note that the searches retrieve top-level views of datasets: there are many more indicators and variables included in each dataset, and more granular geographies. Add additional keywords to retrieve more precise results.

This sample DataSheet from Data-Planet Statistical Ready Reference shows a a map of Idaho counties according to per capita personal income. 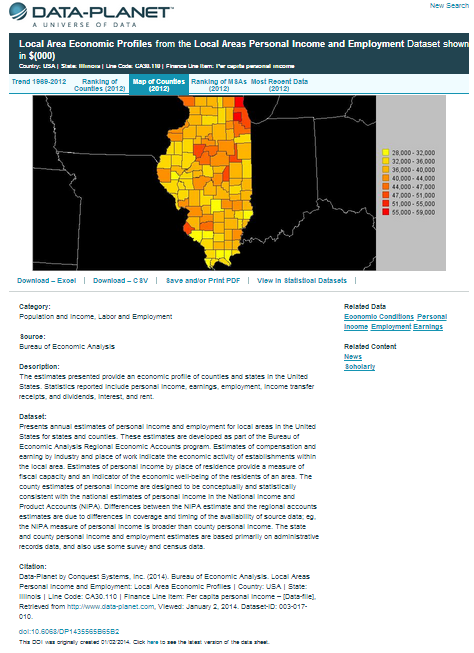