Explore the Data Planet repository for statistics on Iowa, by broad subject categories.

The word "Iowa" is derived from the American Indian tribe of the same name. The area was part of the Louisiana Purchase, and was closed to white settlement until the early 1830s. Following the Black Hawk War, which ended in 1832, the US government gave the Sauk and Fox tribes a small amount of cash, 40 barrels of salt, 40 barrels of tobacco, and some blacksmithing services in exchange for the Mississippi Valley lands of modern-day eastern Iowa. The tribes were ordered out of the area a year later. Today, the Meskwaki Settlement, an area of land around Tama in central Iowa, is governed and owned communally by descendants of the two tribes, who purchased the land back from the government in 1856.

This information was drawn from Iowa.gov and Travel Iowa, both of which provide more detail on Iowa history and culture.

Search for data on Iowa in Data-Planet Statistical Ready Reference using broad subject categories. Note that the searches retrieve top-level views of datasets: there are many more indicators and variables included in each dataset, and more granular geographies. Add additional keywords to retrieve more precise results.

This sample DataSheet from Data-Planet Statistical Ready Reference shows a a map of Iowa counties according to farm income. 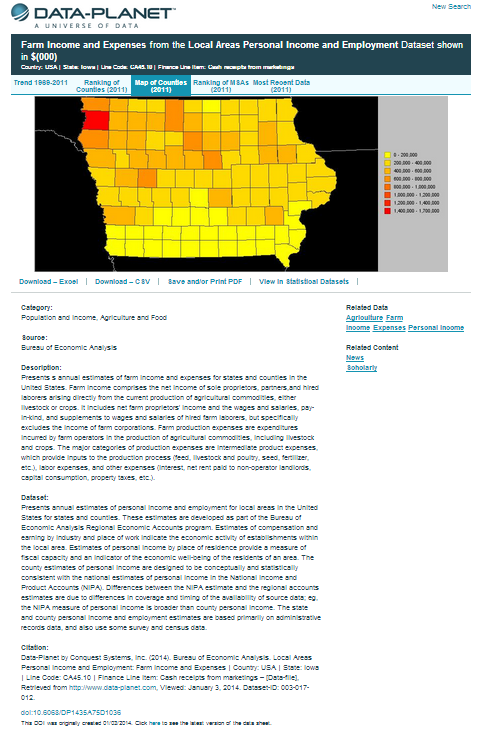