About the ACS 5-Year Estimates

The American Community Survey (ACS) conducted by the United States Census Bureau provides estimates of the characteristics of the population over a specific time period. The ACS collects data from the 50 states, Washington, DC, and Puerto Rico, where it is called the Puerto Rico Community Survey. It is a continuous survey, in which each month a sample of housing unit addresses receives a questionnaire, with approximately three million addresses surveyed each year. Each year the survey produces data pooled to produce 1-year, 3-year, and 5-year estimates for geographic areas in the US and Puerto Rico, ranging from neighborhoods to congressional districts to the entire nation. Data for each release of the 5-year estimates were collected over a 5-year period ending December 31 of the reference year (eg, data in the 2011-2015 5-year estimates were collected January 1, 2011 - December 31, 2015). The statistics reported represent the characteristics of the population for the entire period vs a specific year within that period.

The 5-year estimates are published for areas with populations of all sizes and are the most reliable and precise of the ACS period estimates as well as the most comprehensive, albeit the least current. (The 1-year and 3-year estimates provide data on areas with populations of 65,000+ and 20,000+, respectively. Note that the ACS 3-year estimates were discontinued with the 2011-2013 release). The ACS estimates provide information about the social and economic needs of communities and are used to help determine how more than $400 billion in federal and state funds are distributed each year. It is conducted under the authority of Title 13, United States Code, Sections 141 and 193. Note that counts of the population are provided by the Census of Population and Housing conducted by the US Census Bureau every 10 years; and official estimates of the population are derived from the previous census and from the Census Bureau’s Population Estimates Program.

What Do the ACS 5-Year Estimates Tell Us?

The 500+ individual datasets that make up the American Community Survey contain over 21,000 sociodemographic indicators. Estimates are available for nations, states, counties, census tracts, metropolitan and micropolitan statistical areas, place, and block groups, resulting in hundreds of thousands of data points. The Data Planet Statistical Datasets platform allows you to view estimates separately by indicator and geography and to compare and contrast estimates across geographies . You can also compare the indicators with indicators in other datasets that you find in the repository.

It is important to remember that the estimates represent an average across the entire 5-year period covered by the survey, not to a specific point of time within that period.

The DataSheet below compares the numbers of married couple families with/without children with income below poverty level in Kentucky and Louisiana. Subscribers can link here to further analyze the data. 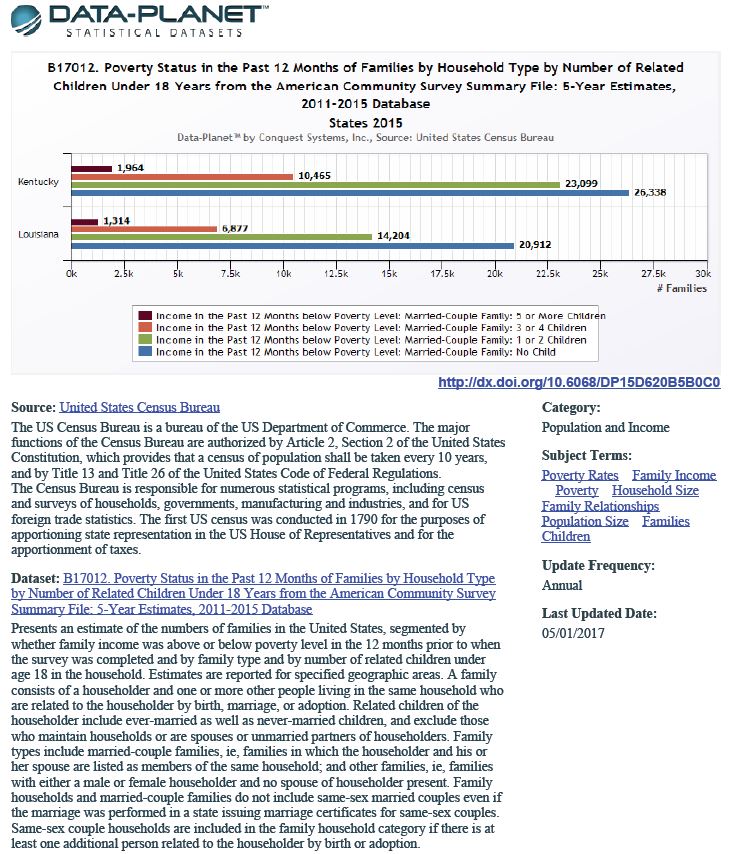 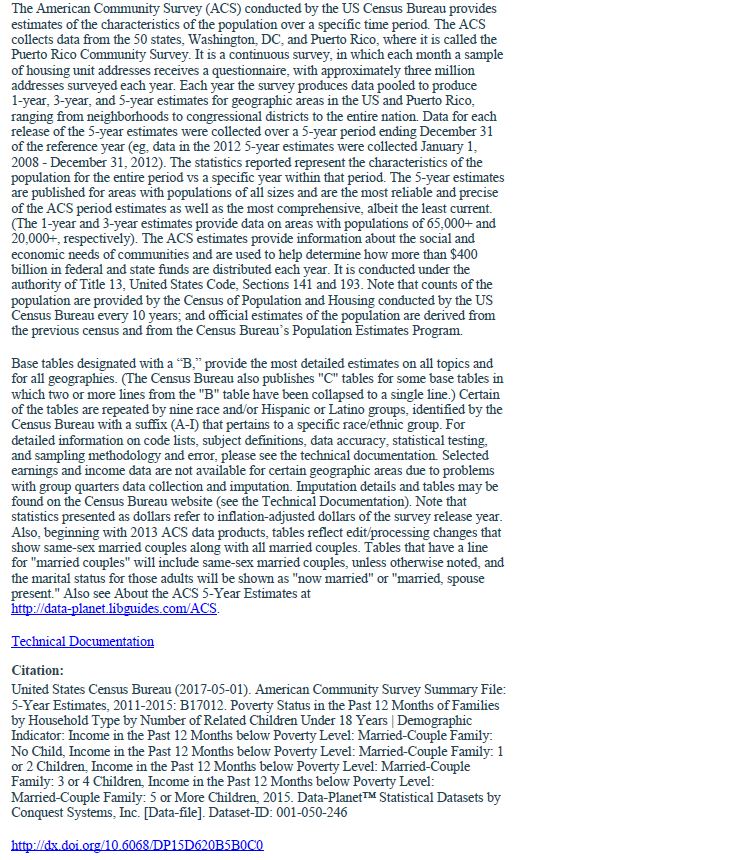 About the Census Bureau

The Census Bureau is responsible for numerous statistical programs, including census and surveys of households, governments, manufacturing and industries, and for US foreign trade statistics. The first US census was conducted in 1790 for the purposes of apportioning state representation in the House of Representatives and for the apportionment of taxes.